Two years ago this week, I was in Cambridge, England. As an American college student, watching my British counterparts study, ride their bicycles to class, and play cricket at the park, I almost felt like I was looking in a distorted mirror. But after 9 days of living, walking, and studying in this medieval college town, it almost began to feel like native habitat. I can’t give you a Lonely Planet guidebook description. So I’ll just share a series of snapshots that characterize the journey there.

Two structures characterize Cambridge: the tall, Gothic spires of the colleges and cathedrals…and the spokes of bicycle wheels. The medieval streets make driving a health hazard, not to mention an insurance nightmare. So everyone bikes. Little baskets and all. Even in skirts. Knowing my world-class klutz skills, I decided to forgo this traditional mode of transportation and let my good ol’ feet carry me….

…to every bookstore in sight. The bookstores in Cambridge are absolutely world-class. There are some fine new shops–Heffer’s and Waterstone’s, not to mention the home office of Cambridge University Press. But better still are the used and antiquarian bookstores. “Old books” in the U.S. reach maybe 50, 60, even 100 years old. But when the Brits say “antiquarian,” they mean it. I found a crumbling copy of The Pilgrim’s Progress from the early 1800s in a discount bin because the spine cover was falling off. The early 1800s! One of these days I’d like to about bookbinding and fix it up. If you’re ever in Cambridge, go check out G. David Booksellers (where I drooled at a two-volume leather-bound set of Samuel Johnson’s Dictionary that cost 2500 pounds) and The Haunted Bookshop (absolutely dripping charm, with a head-bumping spiral staircase!)
The May flowers in Cambridge are also jaw-dropping. Many of them I had no names for, but I did recognize fields of many-colored tulips and walls covered with wisteria, like this one. 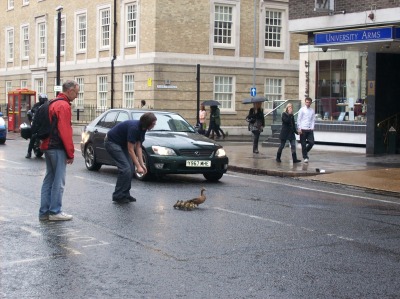 Possibly the funniest moment in Cambridge: a mother duck and her brood of ducklings decided to cross the street, plunging headlong into traffic. Shopkeepers and pedestrians from both sides of the road darted after them, stopping traffic to “make way for ducklings.” It was rather adorable: a whole street of cars and people frozen in motion as a little family of ducks waddled across the road. 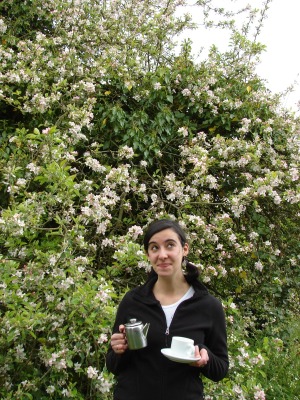 Most fabulous teatime: The Orchard. About three miles (on foot) outside of Cambridge, we sipped Lady Grey tea and nibbled scones and clotted cream at outdoor picnic tables under trees frosted with apple blossoms. The sun even decided to grace us with her presence for part of the afternoon. Sweaters came off; some of our group closed their eyes and tanned; some opened books of poetry; some blew streams of bubbles from plastic wands into the air.

And last, but not least, the King’s College Chapel choir. We attended services at King’s one Sunday morning under the grand fan ceiling, sitting on carved wooden benches with a Rubens painting at the far end of the nave. And then the boys’ choir began to sing. If I hadn’t been looking right at them, I would have sworn it was an adult choir including both men and women. But listen to them! Surrounded by candles in that vast Gothic space, they sound like a choir of angels.

This concludes Episode Three of our Armchair Travel Guide to Britain. Have you been to Cambridge? England? Did you have experiences that you positively have to share?

8 thoughts on “Snapshots of Cambridge”